We woke up to a fantastic sunrise! 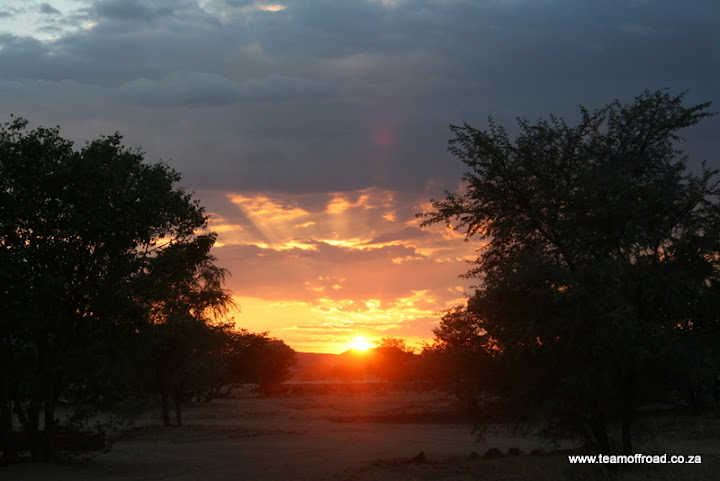 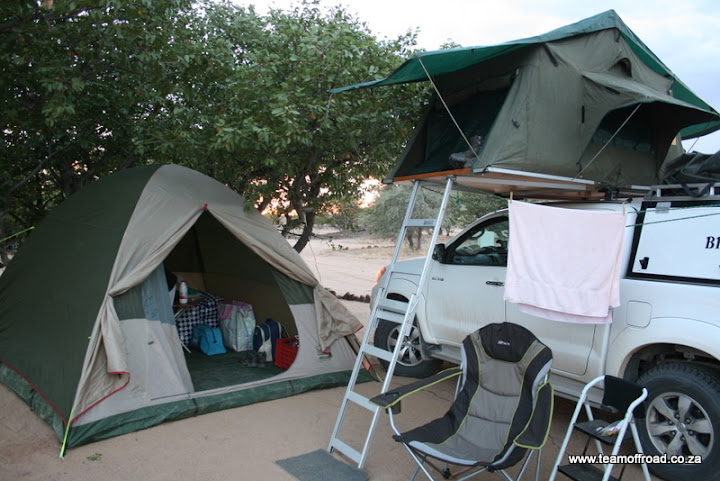 Our plans for the day included the Orrelpype, Petrified Forest, Verbrande Berg and lots of R&R under a tree with some cold liquid refreshments. But first of all we needed to familiarise ourselves with our surroundings, as we arrived after dark we felt a bit disorientated. A quick look around the campsite revealed that Aba Huab is a bit of a dump. Not as far as the actual camp site is concerned, but the ablution facilities are really neglected and dirty. I would much rather shower under a tree with cold water from a jerry can, than having to use a shower stall that is grimey and slippery and where you dont know exactly what those grey/green slimey spots on the walls really are. The missus feels the same. So first things first, we broke up camp, and went on our way looking for alternative accommodation. We stopped in at the Organ Pipes. 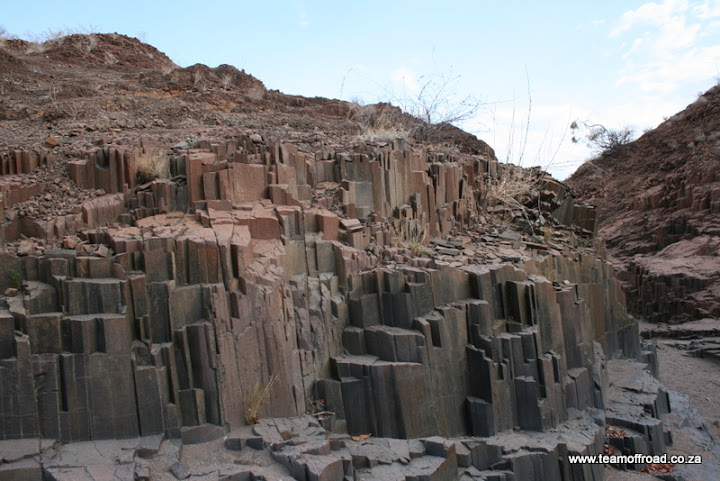 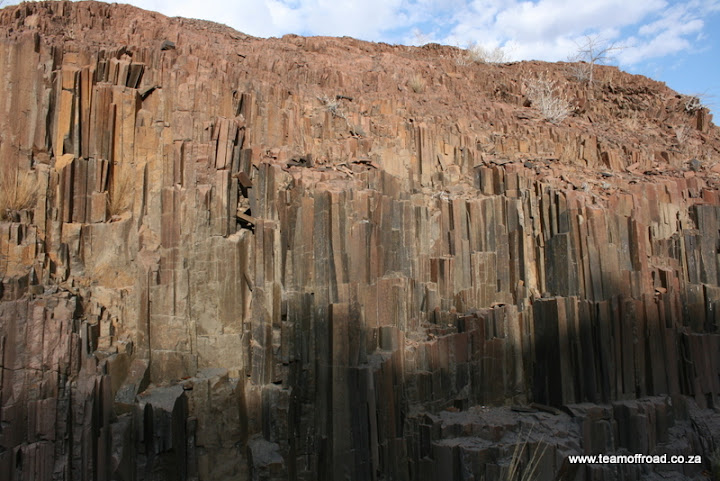 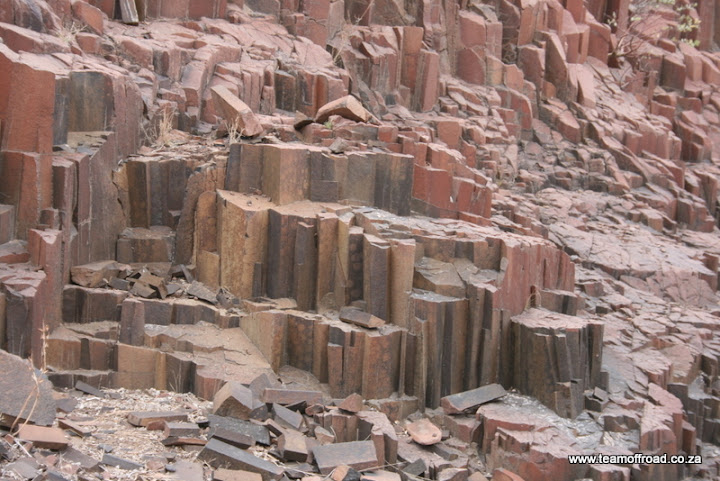 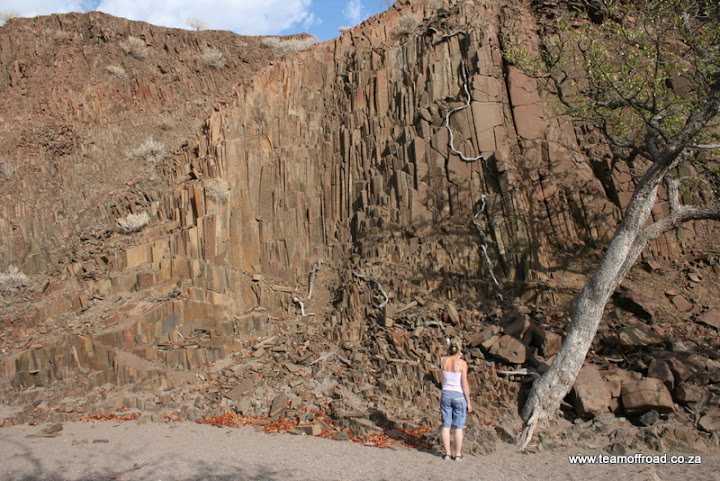 We stopped at the Burnt Out Mountain 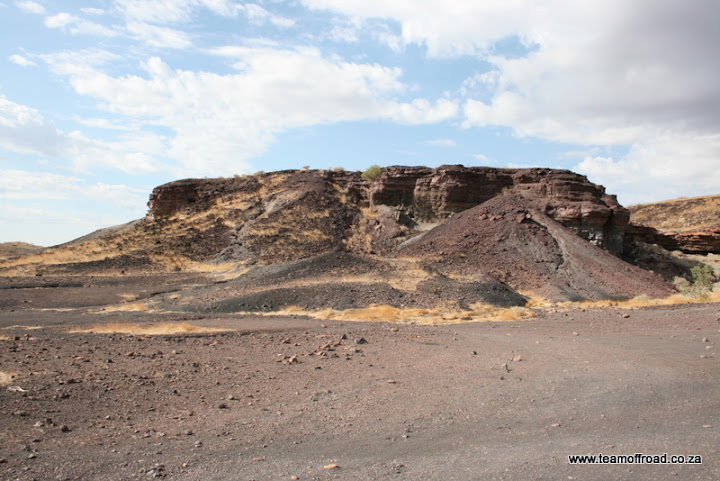 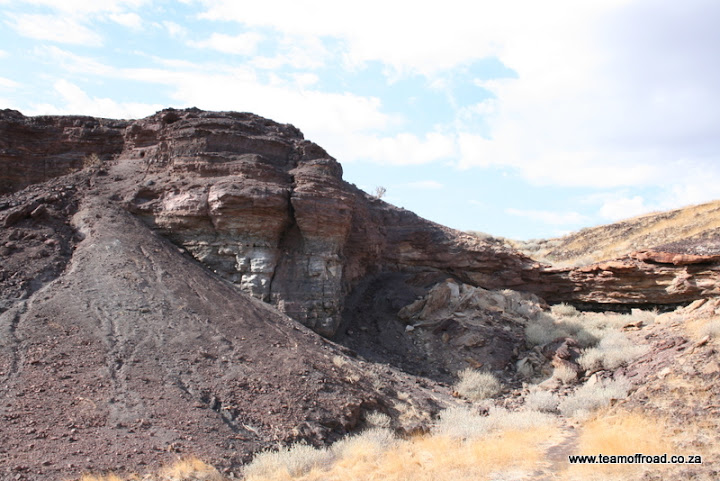 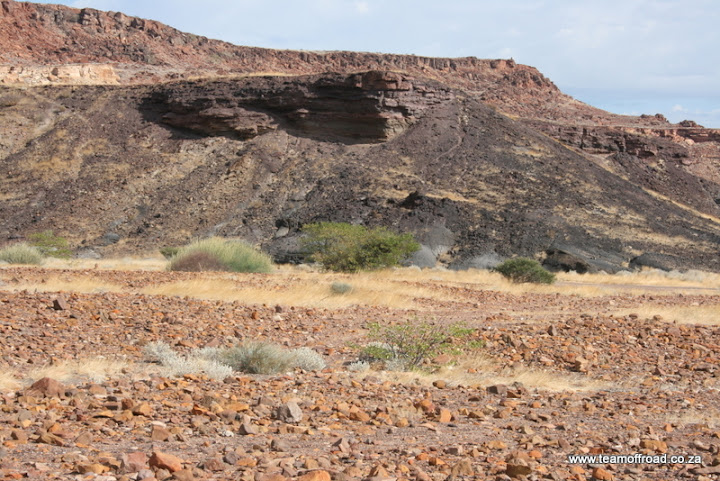 We drove past the Twyfelfontein Lodge, but the Brackenfell in me decided it was waaayyyy to larney for us. Then we drove back past Aba Huab, hunting for some ice, and braai wood. The lady behind the counter either had a hearing problem or I didnt speak clearly but when I asked for braai wood, she responded that they had baaaie wood.... I said no, not baaaie wood, vuurmaakhout, and she said vier kruiwaens vol hout would cost us R80. We all had a good laugh and said good bye. There are some nice lodges in the area, but the only alternative camp site we could find was Aabadi. Facilities are a bit primitive, but at least it is clean and we were the only people in the camp site. Price was the same as Aba Huab, so in that respect it was a no brainer. We booked in and set up camp. Once we had our site secured we drove off to go visit the Petrified Forest. 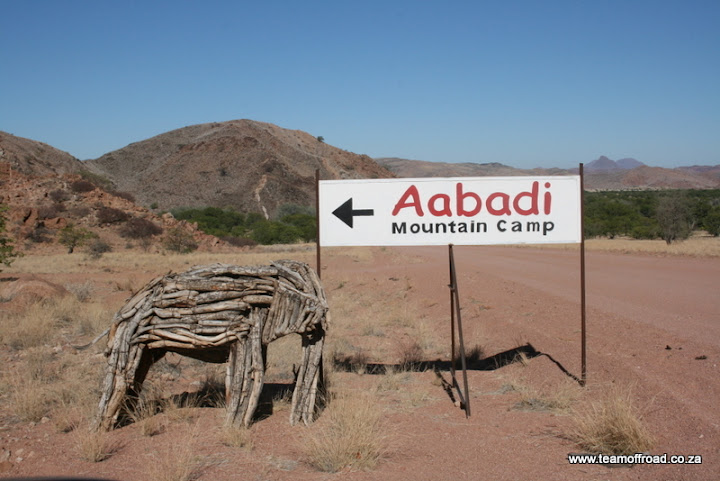 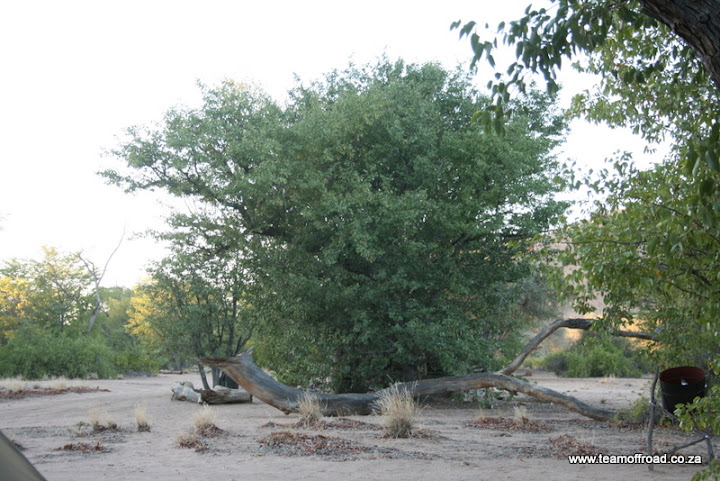 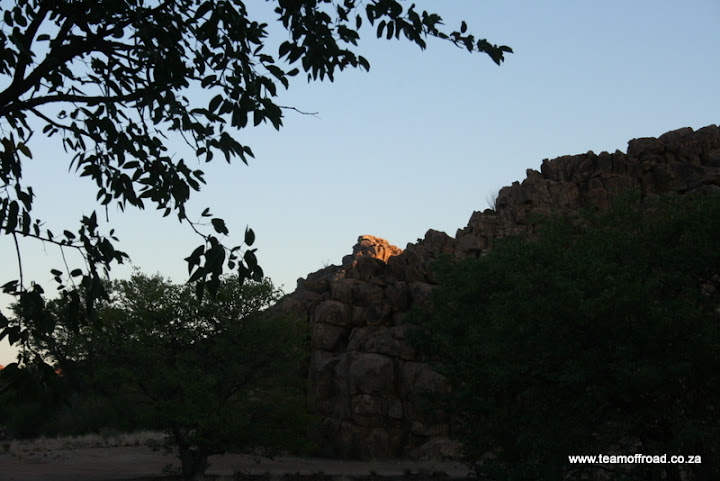 There are a few sites where you can view this, and we shopped around a bit until we got to the "biggest one, the BEST one", or at least that is what it said on the hand painted sign! Jan Damara the guide assured us that they have the best "petrified forest" in the area, and that we can go and have a look and then only pay afterwards if we are satisfied. We also got a guide to accompany us on the 45 minute hike. The best explanation we got from the guide was "Meneer, dis die klep, hy lyk net soos die hout!" And we looked and we saw the kleppe what look just like the hout! Lots of them, even long logs that were pertrified by being submerged in mineral rich water for centuries. Amazing, and after the previous day's hikes it was a walk in the park. 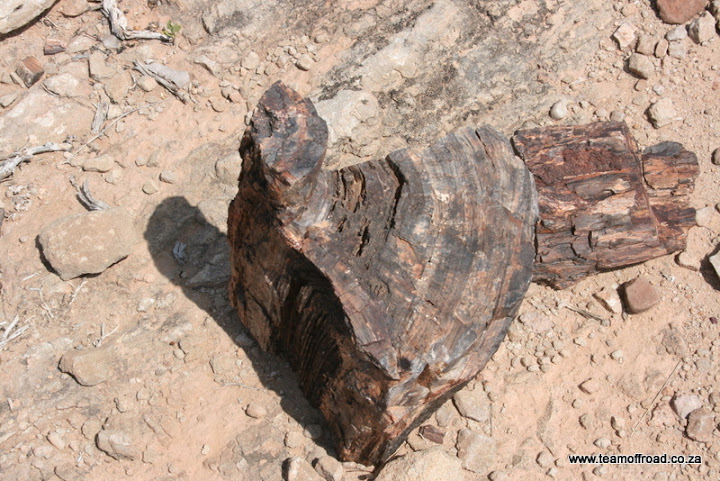 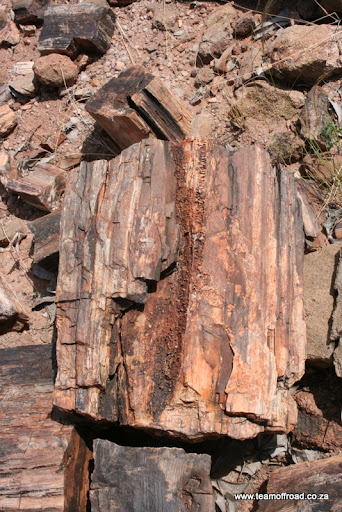 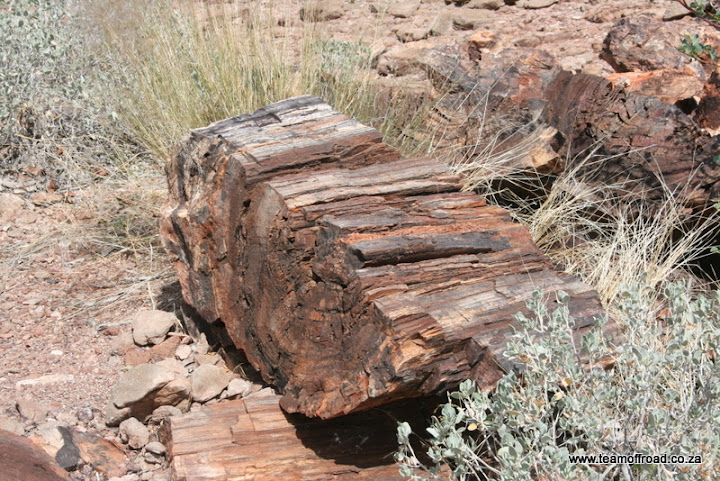 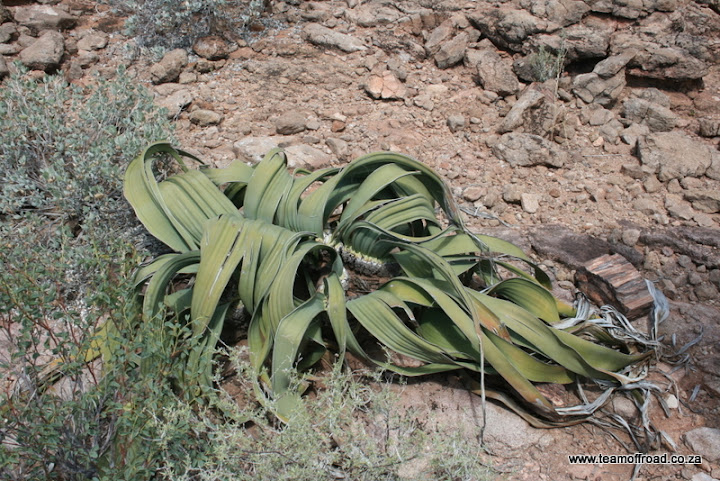 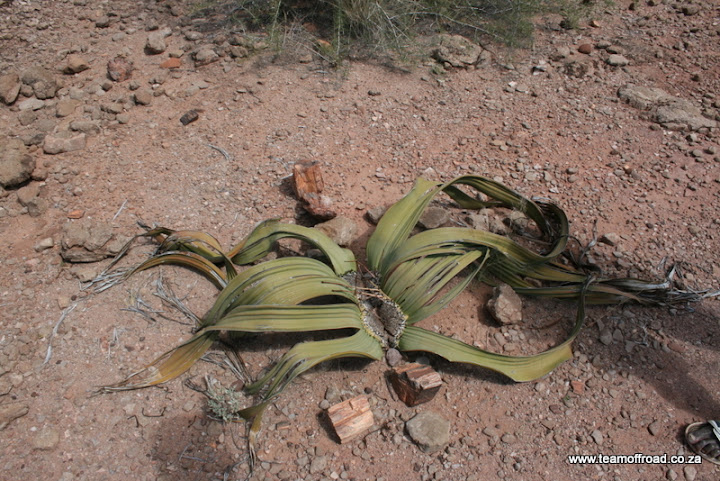 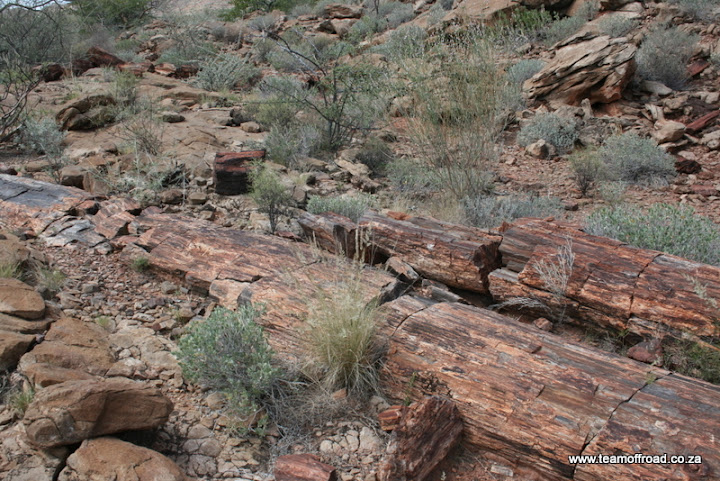 Termite workings in the petrified wood 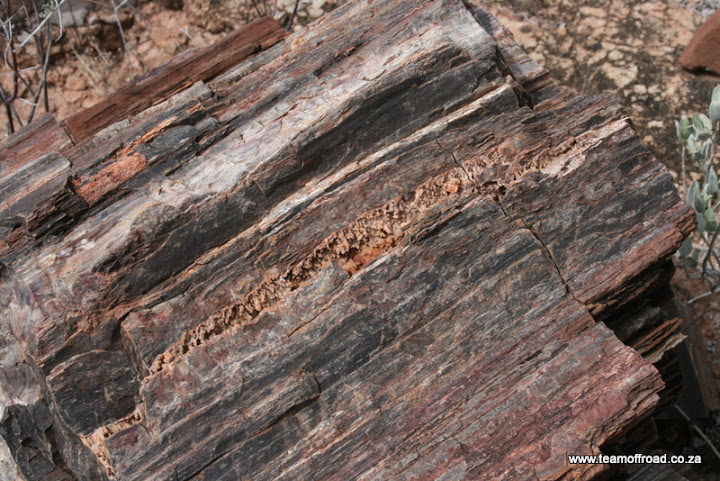 The day was still young, and we realised we were running low on cash, and diesel, so we decided to drive 50km to Khorixas to fill up and to draw some cash. We were headed out into Kaokoland, and we knew credit card machines are very few and far between, and that many places preferred cash. It was late afternoon when we arrived at our campsite and we noticed that we had company. A young couple from Witbank travelling in a LC bakkie set up camp on the other side of the camp site. That night we braaied the "donkiewors" and once we tasted it we regretted buying only 1 packet!! It was really lekker! We should have bought more!! But we heard about the Veterinary Cordon Fence near Palmwag, and we had to make plans with the meat we had on board already.