We had a very relaxing night at Mopane Tented Camp, a superb breakfast of bacon, eggs, wors, toast and all the trimmings. We make a point of having one night of relative luxury on tour, and this was it. After stocking up on supplies at the OK in Opuwo, filling up with diesel and only just avoiding a police and army roadblock we were on our way to Epupa Falls. Mark (0000MS) told my by SMS that we should stay in the second campsite in Epupa, it has a bar and a pool. About 10km outside Opuwo we stopped under a tree in the shade to pack our supplies in the fridge and E asked what makes that hissing sound. I said no way, it must be a sonbesie or something, but it wasnt. It was the left rear (the spare) that was blowing out fast!! So, out came the laundry bag, I stripped to my jocks on the side of the road and got dressed for the occasion. Opened the toolbox, and got the jack under the car as soon as possible. This time things went smoother (practice makes perfect) and once the wheel was off, we traced the leak, luckily on the tread, so I could plug it with a snotplug. I dug a big old dirty shard of beerbottle glass out of the tread, but luckily the damage was not too severe. Plugged it and after checking for leaks replaced the wheel. Had another roadside "bath" and changed back into clean clothes. At one stage we had about 3 young bullocks who came to investigate what was going on, but they could give me any meaningful advice, so i politely asked them to bugger off. 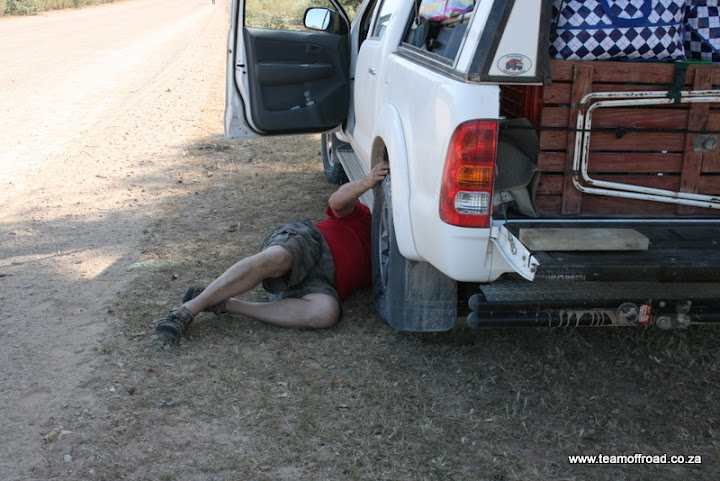 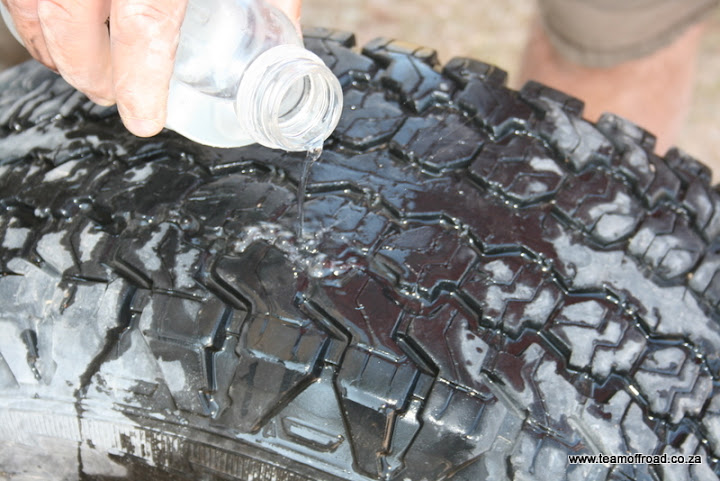 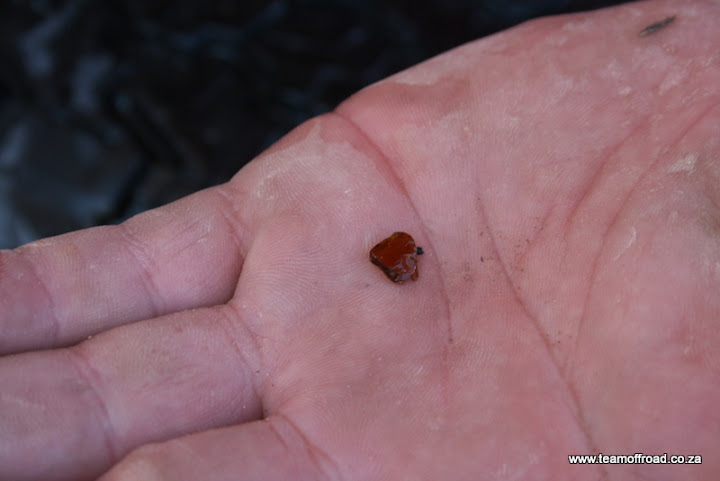 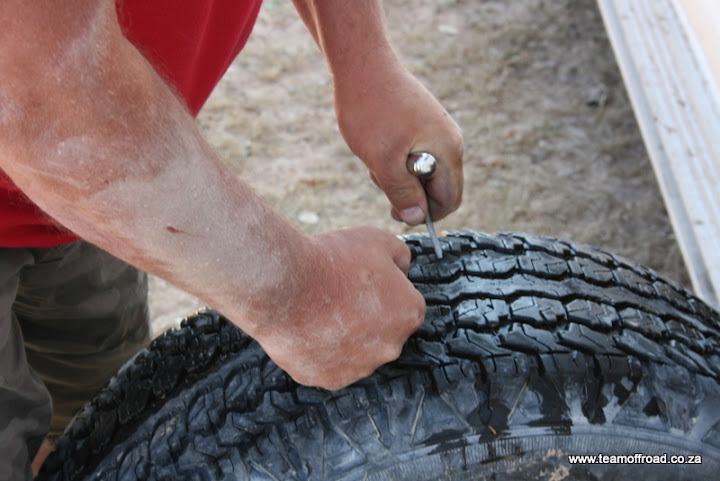 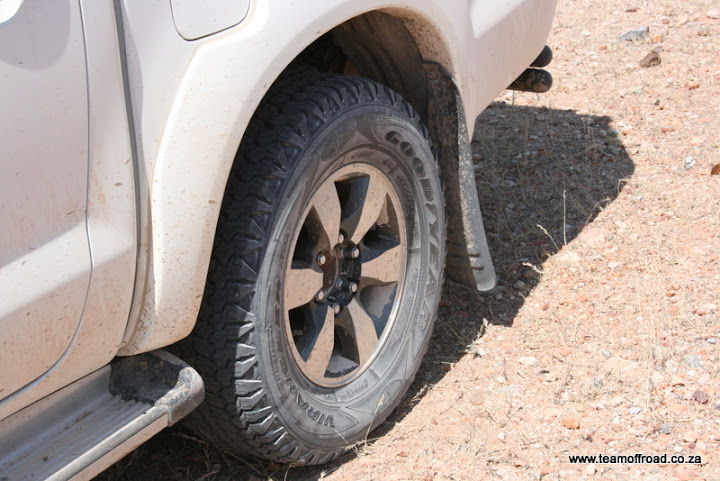 After about 30 minutes we were mobile again, and slowly we krept up on Epupa. It was after all only about 180km's and we had all day to get there. Nothing much to report on the way there except the Zebra mountains, and frequent stops to check on the wheel. Once we arrived at Epupa we checked out both camp sites and opted for the second one with the swimming pool and the bar, Omarunga Lodge. Thanks for the recommendation Mark. We didnt opt for a campsite on the bank, as there was no shady spots available, and it was quite crowded with a whole bunch of people from Witbank. We stayed at Campsite nr 6, a HUGE site, with lots of shade. As we were going to be there for 2 days we set up a proper camp, with gazebo and all the trimmings to make life comfortable. For the rest of the day we chilled in the shade and listened to the waterfalls and later in the afternoon we went for a swim. 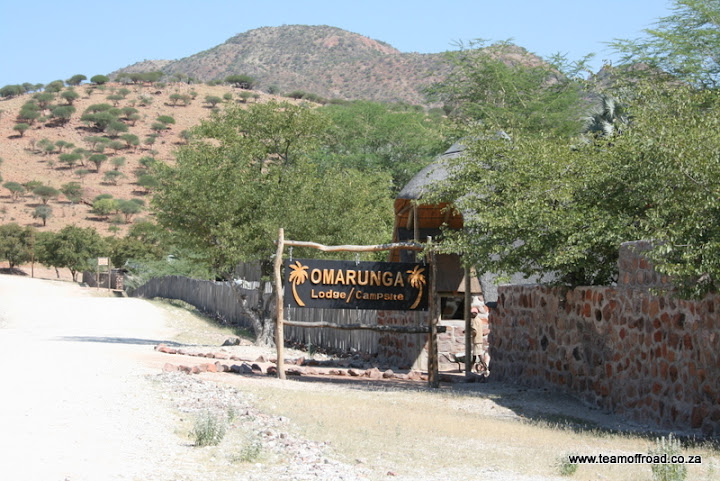 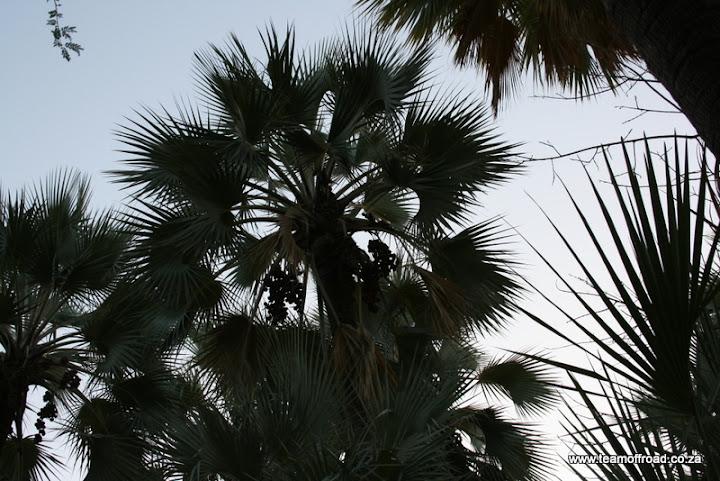 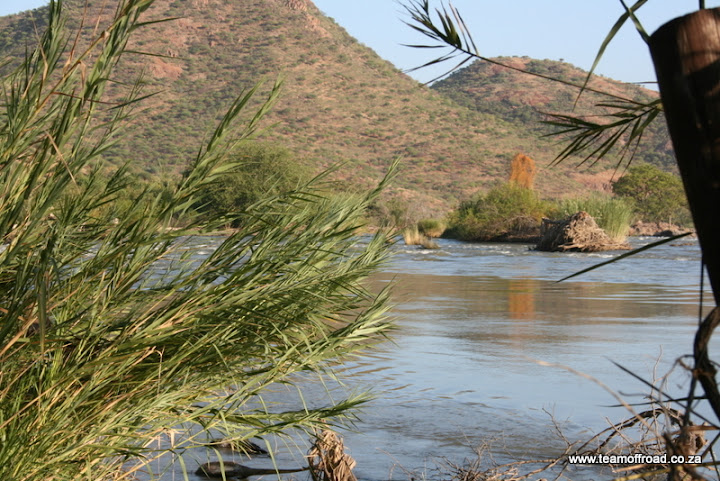 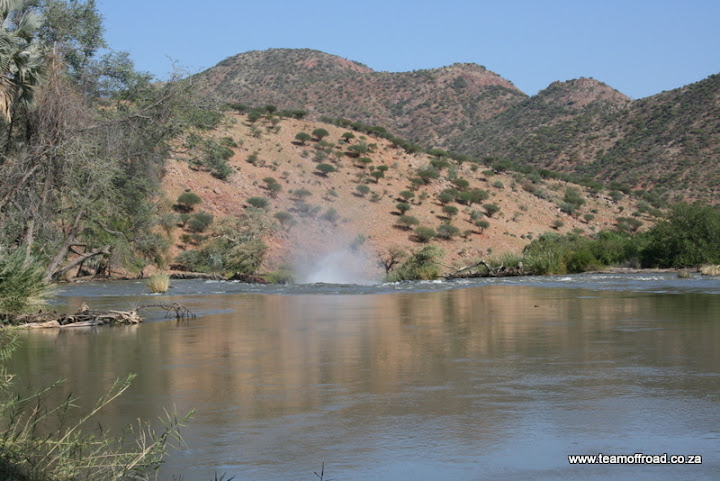 Before dawn the next morning the bunch of Witbankers packed up to leave, and promptly 2 of them bumped their cars into the palm trees, with some damage to the cars. Maybe they were still asleep. Once the sun came out, we contemplated moving camp to the bank of the river, but decided against it. We took our chairs and went and sat in the shade on the bank watching the Kenene flow past. This is life man! We were hooked on this place, so calm and relaxing under the Makalane Palms! There was some drama during the day when a helicopter landed just outside the lodge, and one tannie thought it was an emergency landing. 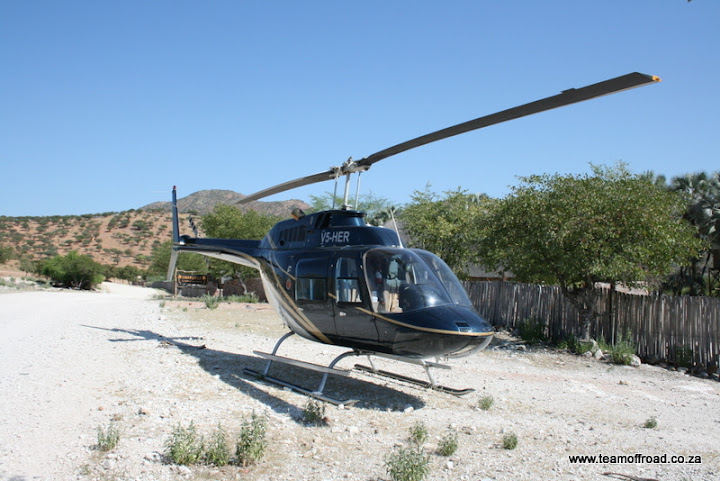 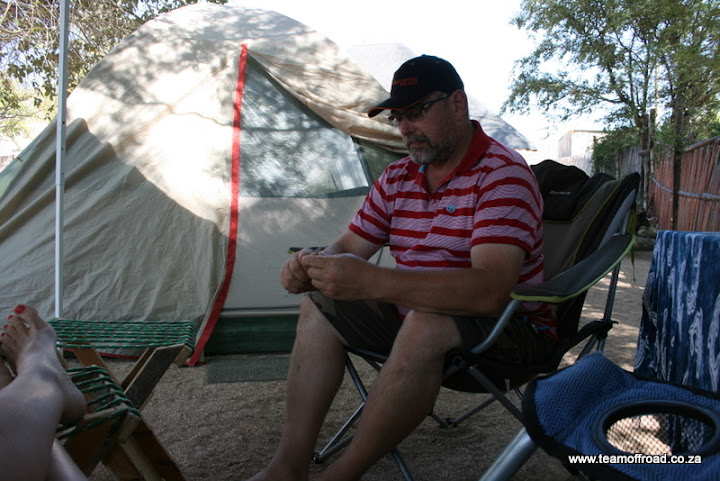 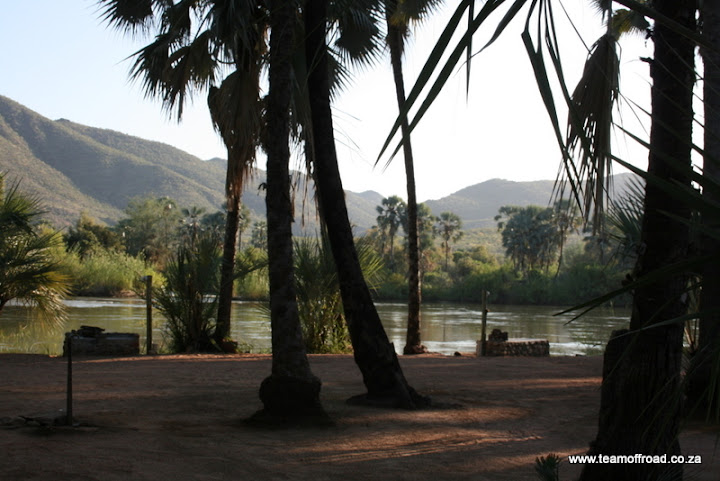 Only much later during the day did we go and see the falls from the lookout on top of the hill. This was very spectacular, and the river was only half full!! I cant say much more, you have to see it to appreciate it fully. Even the pics we took does not do it justice. 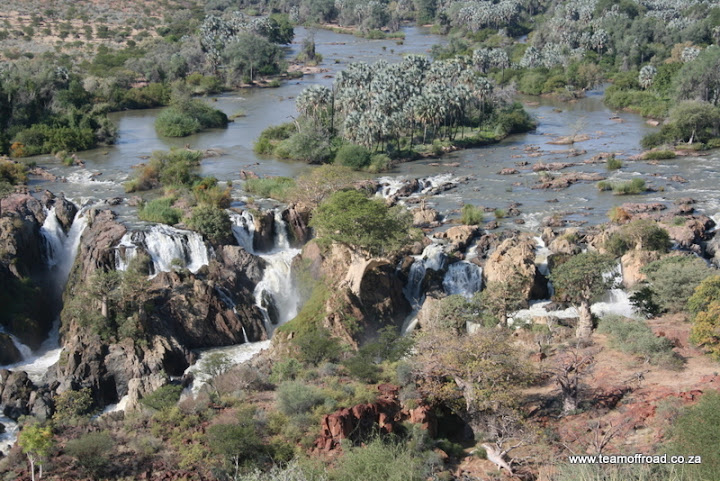 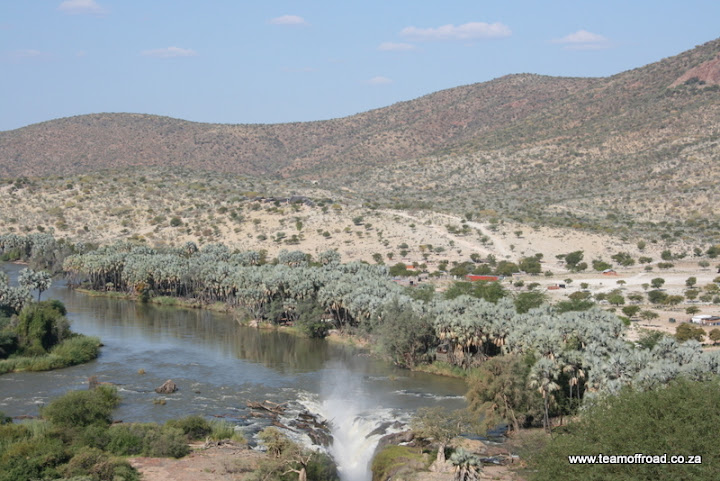 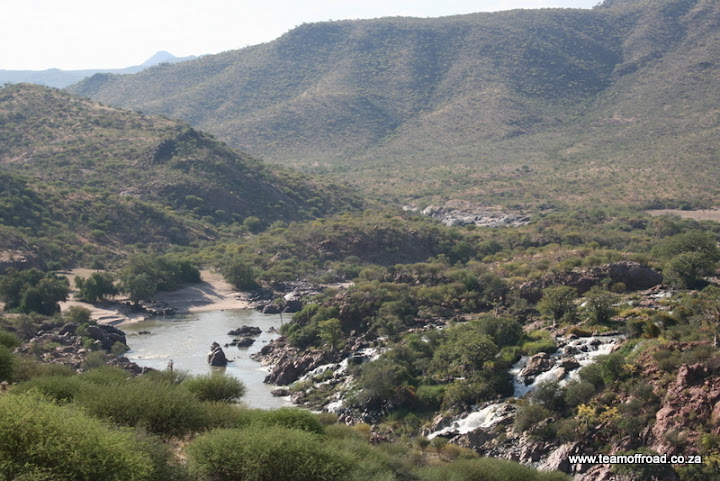 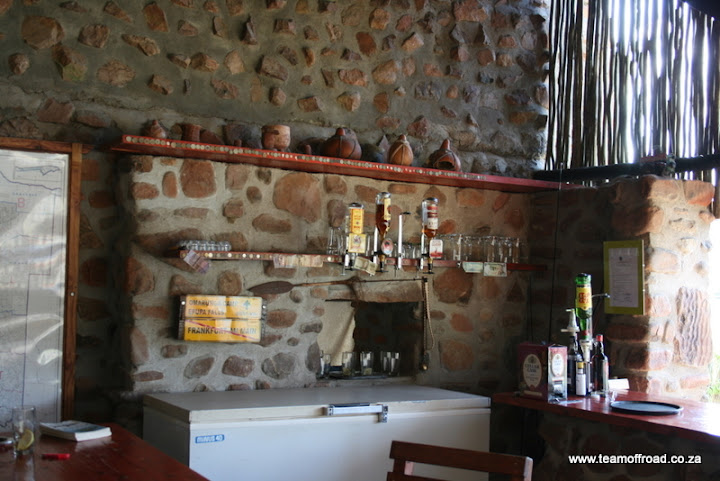 Just before sunset we went to the bar to have a drink and pick Gielie's (the manager) brains on the route we were planning on taking the next day. The helicopter landing was not an emergency landing. It was 2 crocodile monitors guys, who heard about a problem croc in the area, and came to investigate. Apparently this croc took 2 people and a dog in the last couple of months from the bank of the river. We were very happy with campsite nr 6 thanks!! Gielie and Cindy chatted on and on like we have known each other forever!! We felt very welcome!! Turns out the route along the river from Epupa to Swartbooisdrift was blocked by a vehicle that got stuck and was not recovered yet. Apparently a section of the road was erorded underneath by the rived, and collapsed when the vehicle travelled over it. Gielie recommended we gave it a miss, unless we were prepared to spend at least 2 days on this trail building roads to get past the stricken vehicle. The fact that we also only had 1 spare wheel counted against us. We decided this was not going to happen at all and after checking out the sunset from the bar we went back to our camp and had a lekker braai! 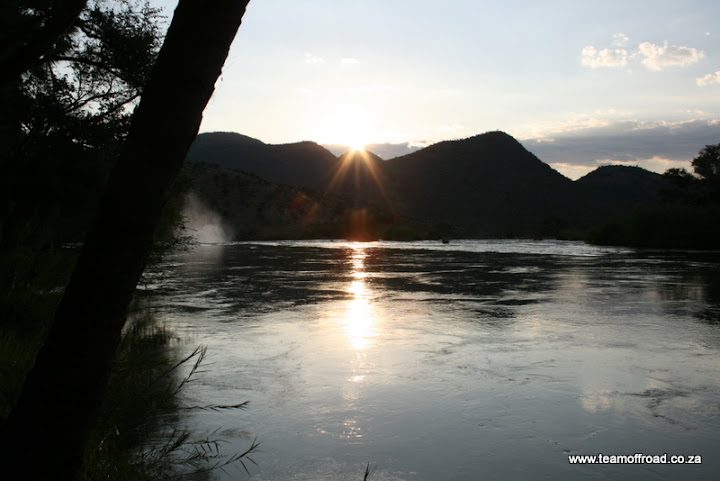 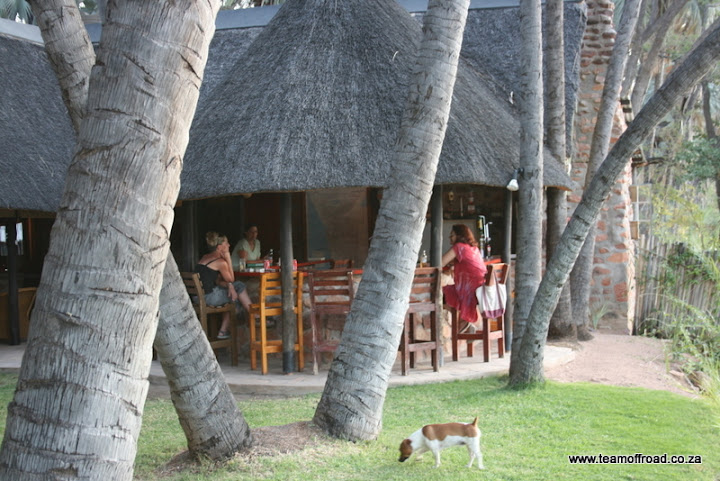 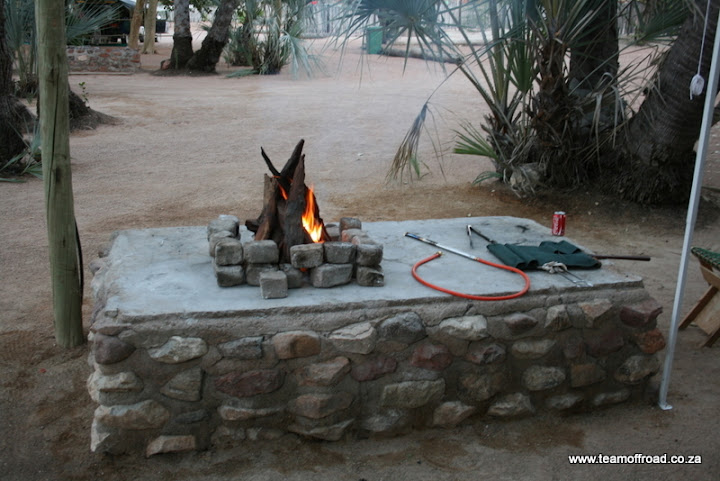