Day 13. And this would be one of the unlucky ones. Strange because I am not supersticious, and 13 always was a good number for me, hey I live in Nr 13! Anyway, I digress. After a night's light sleep, we woke early to the sound of 100 000 patryse screetching in the bushes. Coffee and beskuit later, with the camp packed up, we left Puros for Opuwo via Orupembe. This was going to be a hard day's drive according to the trip advisor who suggested the route. Not because of distance, but because of the road conditions, hence we decided to get an early start. Out here in the desert, the temperatures stil go up to 40 and beyond during the day despite it being late April. The landscapes are amazing with nothing but gravel and rocks as far as the eye can see. We love it! 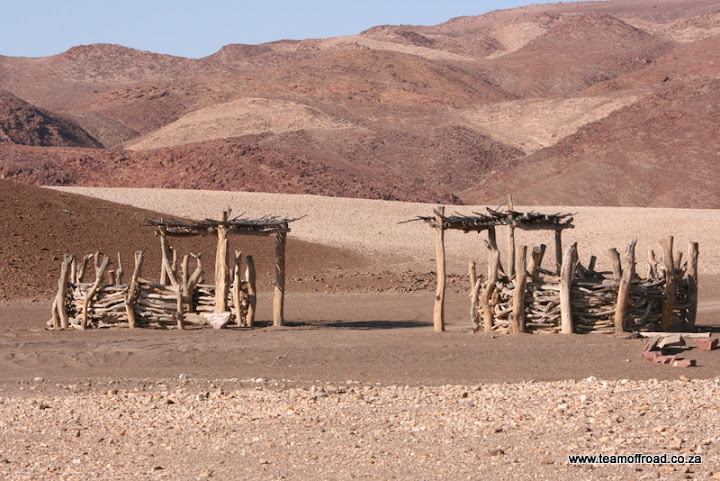 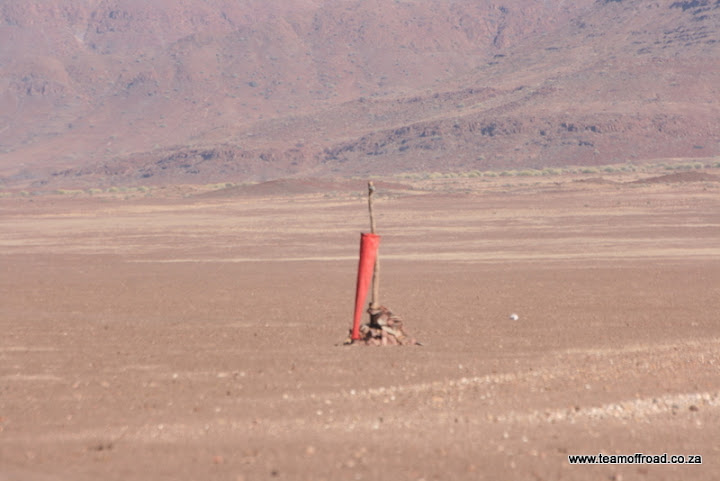 We stopped at the very busy Puros Airport to look at the planes, but it seemed they were all delayed elsewhere due to foul weather conditions, because conditions at Puros were perfect! Soon we saw what was meant by bad roads. Steve, i reckon this beats the road from Pofadder to Onseepkans. The corrugations are so widely spaced, that there is no "comfortable" speed to drive on them. It is slow and bumpy going, because anything over about 30km/h feels like the steering wheel and the dashboard is going to end up on my lap. In most places there are tweespoor tracks alongaside the "main" road, made by people looking for a more comfortable ride. Corrugations? 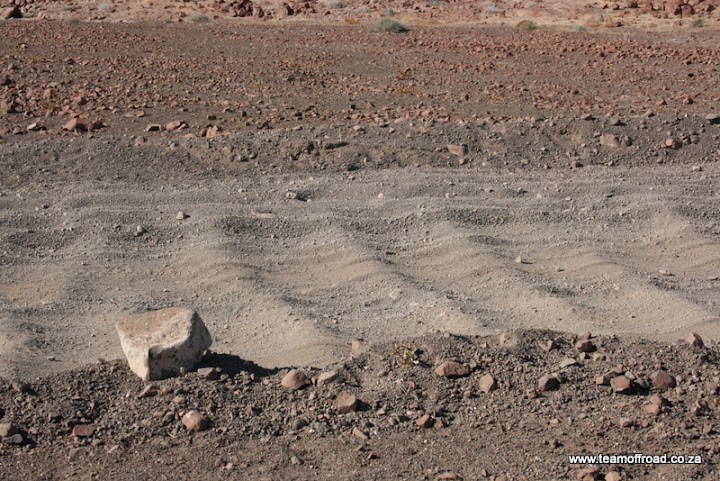 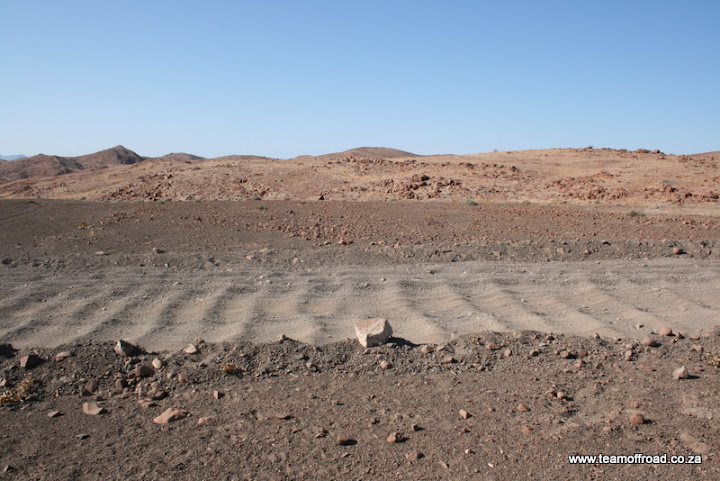 At one stage we pulled off road to have a break and then disaster struck. Left rear inner sidewall cut badly by a rock. One of those sharp ones, that are everywhere around! Within minutes the the tyre was completely flat. Luckily we were in the process of stopping anyway, so we didnt damage anything else. Out came the laundy bag, and my cleanest dirty shirt. Then the gloves. I am the guy who tells everybody to wear them, so I need to lead by example! I am very happy with the placement of my toolbox and the accessibility of my stuff, so getting to the jack, spanners and all the stuff I needed for this operation was a breeze. The standard Toyota Hilux jack leaves a lot to be desired though. 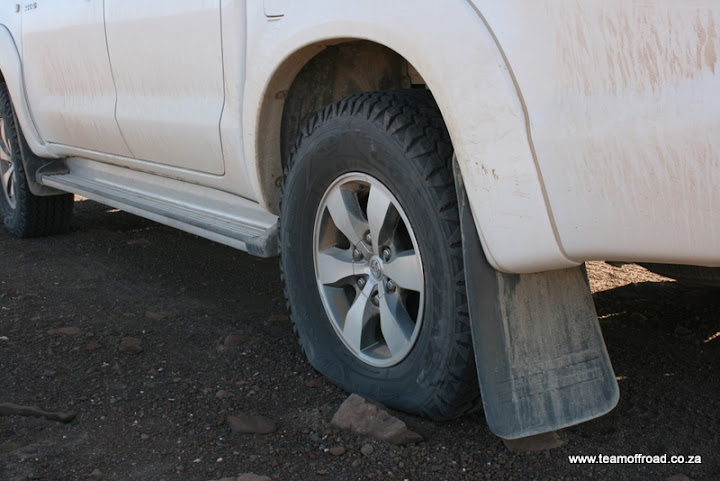 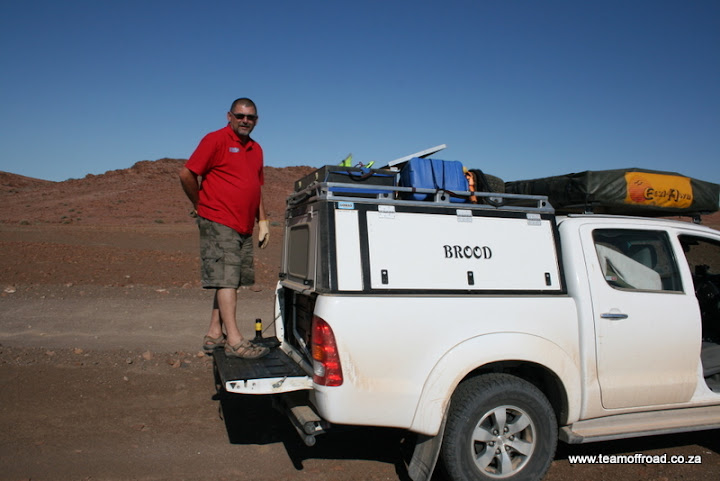 On closer inspection of the wheel I saw that the spot where we stopped was right on top of an ant nest, with these big black buggers already climbing on my feet and biting like crazy, so I asked E to put the vehicle in L1 and move it forward about 30m to get to a "cleaner" spot. At that time I didnt know the extent of the damage yet, and every turn of the wheel made me feel sick as the rim was rolling on the tyre. But rather that than allowing some of those ants access to my touserlegs when I lie down to jack the car up! It was about 11:00 (Nam or RSA time does not matter it was HOT) I had to crawl in under the car to position the jack, there was limited space, off came the gloves!! Eventually after a long struggle I got the wheel off the gound, but not enough to fit a fully inflated wheel. So the rocket scientis in my head decided it is a good idea to dig the gravel out from under the tyre to make space... BAD IDEA! Short story: Gravel = unstable surface. Digging gravel disturbs the surface. Jack on disturbed surface slides into newly created hole, despite the fact that it was on a wooden block!. Car falls off the jack!!! Shortcuts dont work! Do it properly or dont do it at all. Luckily the rim with the flat tyre was still on the car, otherwise we would have had serious problems. This was really a stupid move, and I dont know why I even thought it would work in the first place. We took some time to re-assess the situation. There was no damage to equipment, tools, vehicle or people, so we were lucky. Moved the vehicle forward, out of the hole and onto stable ground. Reset jack, jack up but this time all the way! Very gently, and carefully I replaced the damaged tyre with the spare, and quickly tightened the nuts. A big Mercedes lorry carrying supplies to Puros stopped and asked if we were okay. We thanked them for stopping and said all is fine now, we'll be on our way soon. About 10 minutes later another vehicle stopped to offer assistance. Peak hour traffic!! This time a LHD Land Rover Defender with a German couple who came through the Marienfluss. Once again we thanked them for stopping, and they were on their way. My command of the german language was growing day by day, I now knew 4 words... I checked the damaged tyre to see if I could fix it, but not even a BIG mushroom plug would have saved this one. We also lost about an hour of traveling time, and we were never going to make that up, not on these roads. 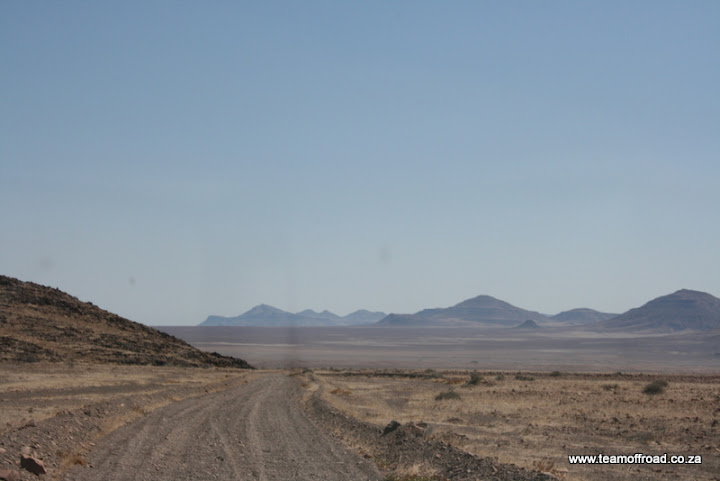 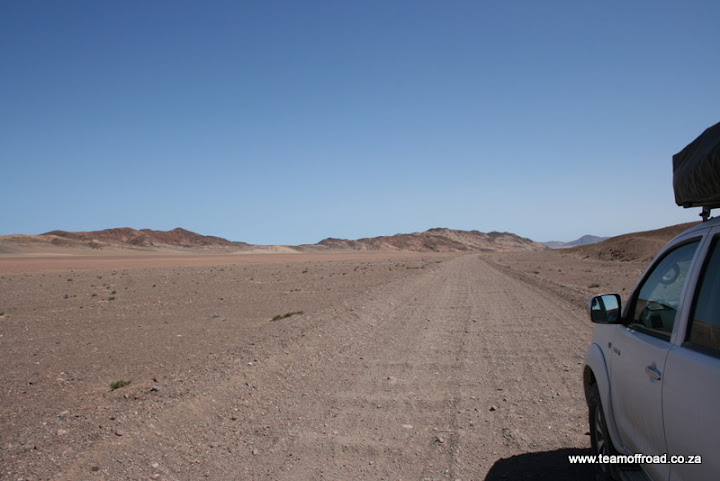 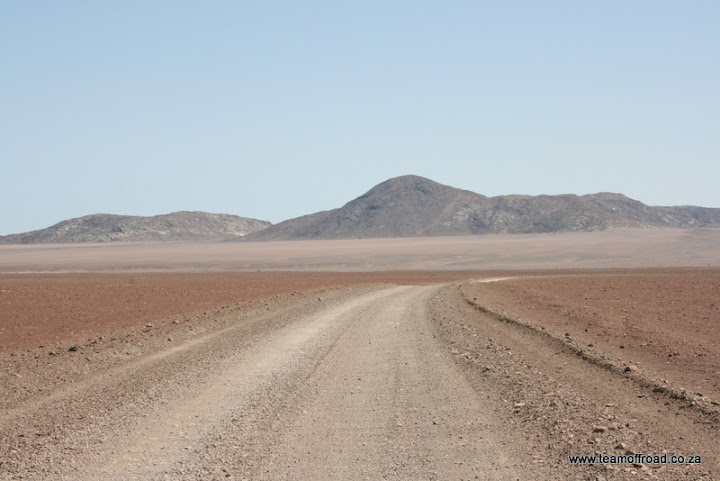 E made sure I had a road-side bath out of a jerry can to rid me of dust, gravel and sweat before I was allowed back into the car. She insists that there must be a little bit of civilisation in the wild, and the cab of the Hilux will be it... I also changed back into my Sunday best, and with all the gear and the destroyed tyre secured we headed off into the wilderness. Needless to say I was edgy now that we were down to 1 spare wheel, and checking on the left rear tyre every now and then. That day we had lots of smoke breaks. We made it to Orupembe about halfway through the day, and decided to invest Nam$17.50 in the local economy by buying 2 cans of Fanta at the local shop. The terrain changed dramatically from the gravel/sand plains we crossed, to lots of rocky hills and valleys and river crossings with palm trees as we travelled in an easterly direction. There were also lots of cattle and goats on the road and Himba villages all over the place. Spectacular views, and nice countryside to drive through. Once we got to Kaoko-Otavi the road conditions improved and we made good time to Opuwo. It was about 18:00 when we reached Opuwo, and our accommodation hunt commenced. Not wanting to have a repeat of the Aba Huab episode, we checked out Mopani Tented Camp, got a quote and decided that we were very willing to pay the discounted SADC-rate of R403 pppn including buffet breakfast. We also opted for the buffet dinner, meaning we only had to unpack our clothes bags and have a relaxing evening. We deserved that after the long hard day. Dinner consisted of a 3 course braai and a couple of cold beverages in a very nice lapa. 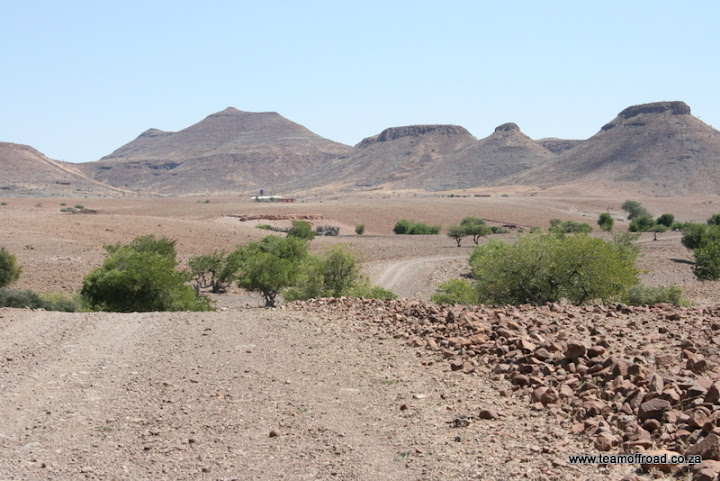 Hand Pump according to T4A you can drink this water. We didnt try.. 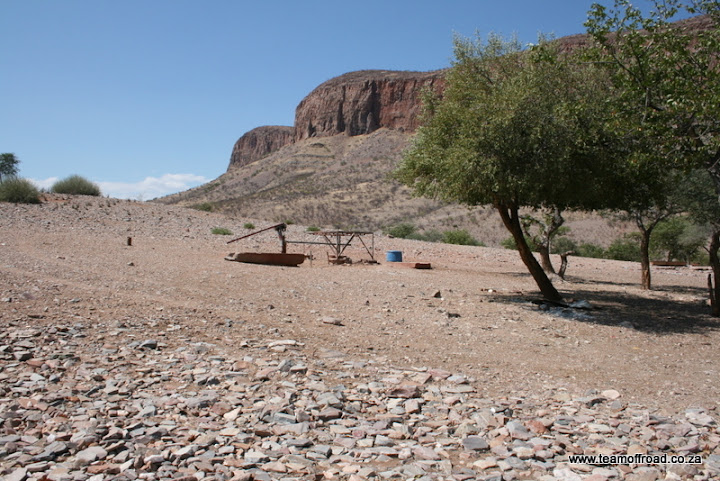 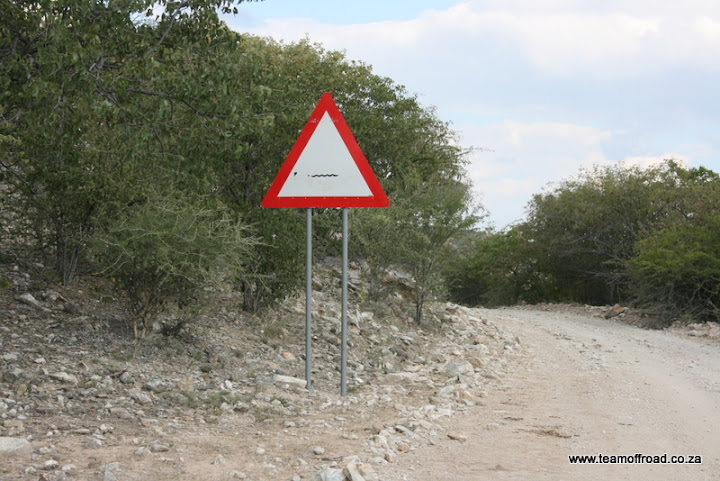 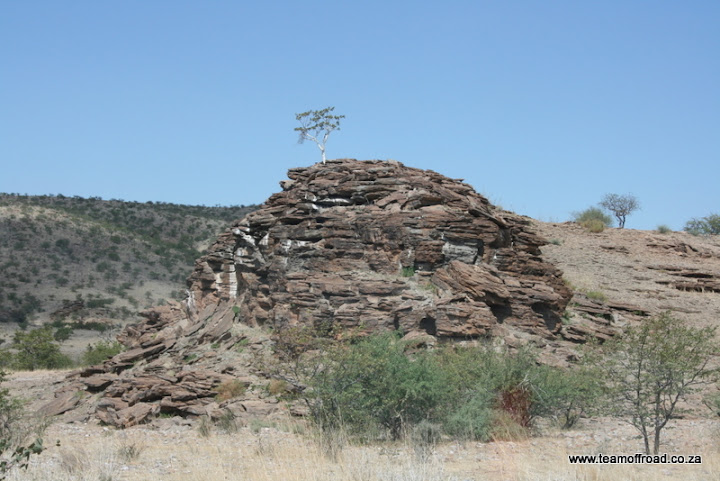 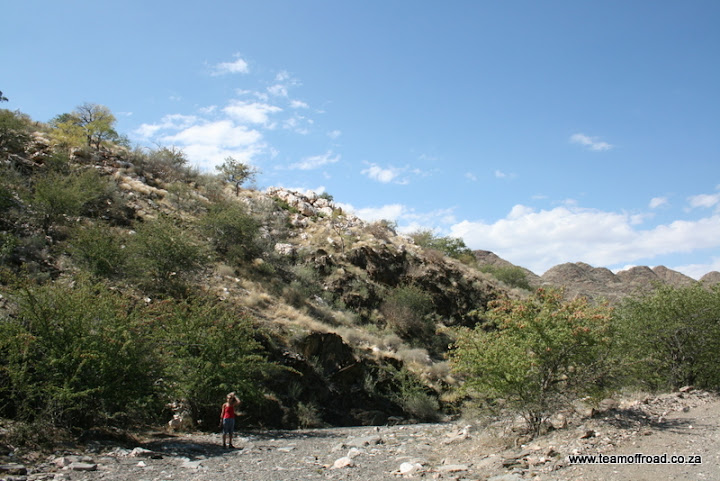 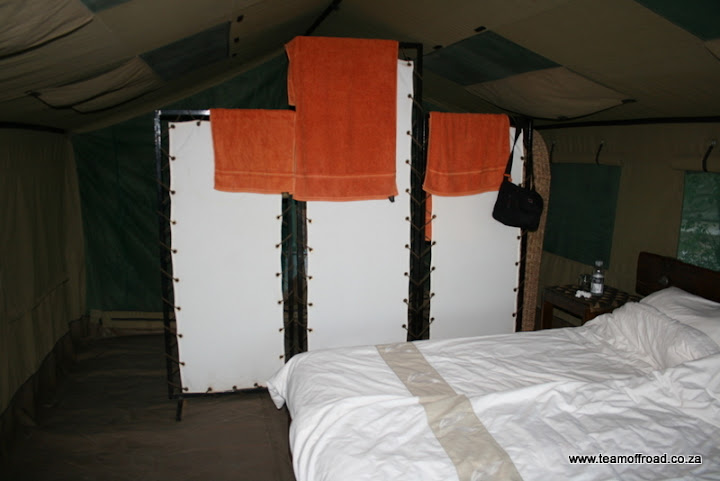 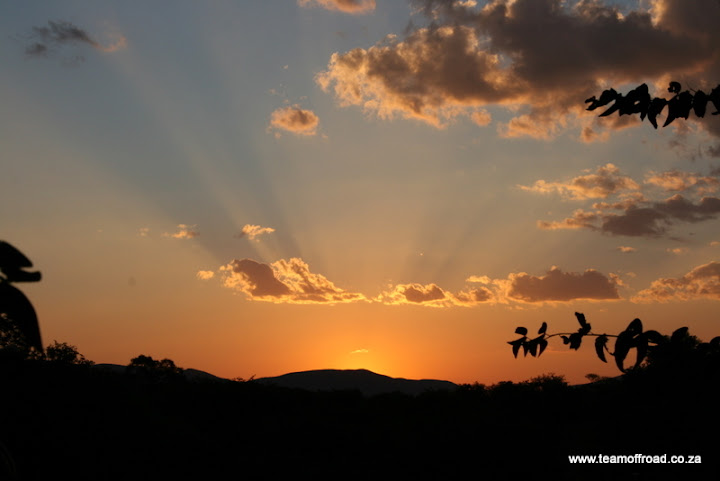